Somehow, Reinisch's YouTube video of him soloing Taretha's Diversion got picked up in Germany in some major way, and as of this writing has been viewed 11,859 13,725 times (it went up as I edited this).

Google even shows that it was, for a time, among the top 10 viewed movies (but as the summary is in German, it seems to be a German top 10):


Again, via google, the boost in traffic seems to have been from http://news.deine-community.net

Plus, I just noticed that Reinisch is now two years old!

Update: Thanks to comments, I now know it's from http://wow.buffed.de/news/11250/wow-leveln-ohne-monstertoeten, a German-language WoW site. If you can't read German, here's a babelfish translation

I had to do this quest twice; the first time, I died (and released) before I got credit for "Internment Lodges Set Ablaze", and even though they were burning, it wasn't complete. Since I couldn't re-burn a lodge, I had to reset and do it all over again. I nearly had to do it a third time, but I got credit with about 2 seconds left on my Spirit of Redemption form. I intended to delay my death as long as possible by using a target dummy, my cloaking device, and an invisibility potion, but I died right when I deployed the target dummy.

Posted by Brian Westley at 2:51 PM No comments:

I couldn't think of a way to solo this until I remembered the platform that Vaelen is on (the guy who gives out the Seal of Ascension quest). That platform is high enough for me to zip over to the Ogres using my rocket boots. An invisibility potion and my cloaking device did the rest:

Managed to do a number of Blackrock quests:

Attunement to the Core was pretty easy, jumping out the window just before the big door, going down to the black anvil, and some lava jumping to the bridge. The only tricky part was getting past the 3 fire elementals on the bridge, which I did by going up the steps towards the dwarf room and using my rocket boots + levitation to jump over them.

Reinisch did The Spectral Chalice to learn how to smelt dark iron, but the quest itself was unexpectedly gray and resulted in less than 900 XP. It was still fun to do:

Mother's Milk was easier than expected:

En-Ay-Es-Tee-Why, the quest to gather 15 spider eggs, was about the same as Mother's Milk, but I didn't bother to use invisibility potions, I just ran past the orcs, feared them, and opened one or two egg sacs before dying and grinding out 15 that way (with occasional dungeon resets). 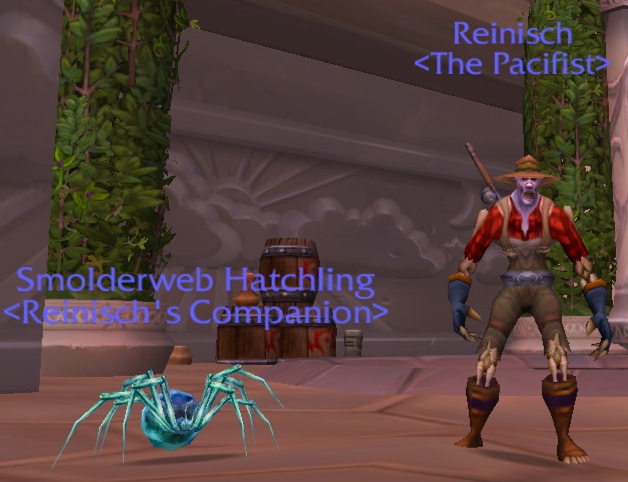 I'm not sure if Reinisch can do Kibler's Exotic Pets...

Posted by Brian Westley at 9:44 PM No comments:

Cooking, no fishing yet

At level 65, I can now do the Dalaran cooking daily (only about 75% of the XP for a BG or towers daily), but I still can't get the fishing daily, that won't open until level 70...
Posted by Brian Westley at 4:39 PM No comments:

After a few failed attempts, I finally managed to escort Skywing safely. Skywing took out the other mobs before Luanga showed up, and the next bit was really lucky -- my Renew on Skywing had Luanga come after me for a bit, but by running back to the other bird tower, I got out of combat! Every time I healed Skywing or got damaged (storm/lightning), I would go into combat, but I would go out of combat almost immediately. This allowed me to drink during the fight to keep my mana up and keep healing Skying. The two of them also fought straight across the bridge, so Skywing always fell back onto the bridge (instead of onto the ground) by Luanga's knockback effect. The whole thing took about 45 minutes. 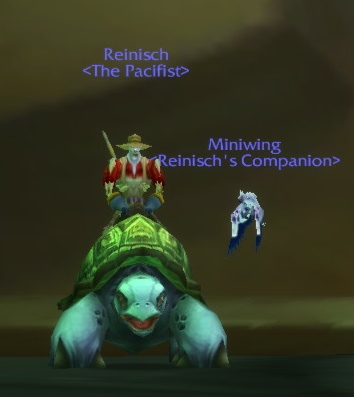 Mechbuilder's Overalls finally showed up in the horde Auction House, so Reinisch finally has the rare green overalls.

Reinisch is almost level 64 as the Fire Festival winds down. He can do 4 out of the 5 all 4 (Strand of the Ancients does not seem to be a BG daily) BG dailies, and usually win it, plus the Spirits of Auchindoun daily, and he'll start exploring more of Northrend to get to level 65, which should open the Dalaran cooking dailies and maybe the fishing daily, too.

I think I can do the Skywing escort if I can prevent Skywing from getting knocked down to the ground, but that's a bit tricky...

Later I'll post a montage of a bunch of times I've used Rocket Boots Xtreme + levitation to travel around for the Fire Festival.

Addendum: Reinisch was able to get neutral with Garadar, something Noor was never able to do with Telaar. Not many extra quests yet, but there are some gray ! that I should be able to do at 65 or 66.
Posted by Brian Westley at 9:32 PM No comments: