I can do the Muisek series of quests in Feralas, if I'm lucky enough to find corpses to use them on. I've done the first one (Owlbears in Hinterlands) and I've gotten a few of the hippogryphs. Noor was never able to get Screecher Spirits done, and Reinisch still has it, but it looks like he'll be hanging around Feralas a while, so maybe he'll get lucky.

Addendum: I've been able to do all the Muisek quests except the last one, which involved corpses of the elite giants in the northern region of Feralas, and I still haven't been able to do Screecher Spirits.

Posted by Brian Westley at 4:19 PM No comments:

After saving up too much copper and not quite enough mithril (and no steel bars), Reinisch went back to blacksmithing for a few hours and did the Mithril Order chain to get about 80% of a level in XP. Like Noor, he now has the now-useless special trinkets: 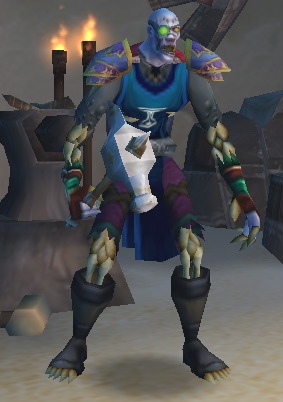 Posted by Brian Westley at 12:48 PM No comments:

Just a little over halfway through level 39 (about 11 bars), and I decided to start the wild leatherworking quest chain. When I finally completed it, I was only about 2500 points away from level 40, so I explored more of Tanaris to hit 40. I was able to buy the mats needed to take Elemental Leatherworking, which got me more points that Noor missed (she did it well before level 40, so it wasn't practical to keep it for the leatherworking specialization quests that start at level 40).

I'll probably re-take mining for a bit to get more copper bars before dropping it yet again and doing the blacksmith chain.